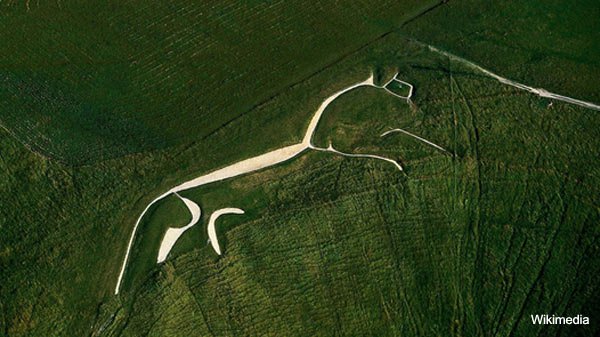 When something is sacred, or holy, it merits special attention. Sometimes, that means making something very BIG. The Greeks erected huge statues of their gods and goddesses in temples, so large as to inspire awe in the comparatively small humans who stood at their feet.

The Uffington White Horse, located in Southern Britain, is perhaps the best known surviving rock “carving” from the Iron Age. 360 feet long- the length of an American football field- and 130 feet high, it is cut into the side of a hill with white chalk beneath. Laser soil dating shows it was cut about 1 century B.C.E., which would put it of Celtic origin, and probably linked to the worship of the Celtic horse goddess, Epona. Later Saxons may have revered the White Horse as sacred to Odin.

Until the late 1800’s, the Uffington White Horse was cleaned or “scoured” every seven years in a scouring festival that lasted for days and included games, sideshows and vendors.

” The owld White Horse wants zettin to rights/And the Squire hev promised good cheer/Zo we’ll gee un a scrape to kep un in zhape/And a’ll last for many a year.”

Ballad, “The Scouring of the White Horse’ by Thomas Hughes, 1857

I like to think about the effect that this White Mare might have had on passerbys two thousand years ago. What did they think about her? Did it uplift their hearts to see her cantering on the land, her every step a blessing of strength and fertility? Did they stop and say a prayer of thanks or blessing? Her presence would have been rock-steady, day in and day out, a permanent reminder of Deity that stayed through human births and deaths. How reassuring her presence would have been.

Kudos to the British government who thought to protect her in more modern days from potential bombing during World War II by employing camouflage. May she gallop on through time to come. -November 1, 2019 E.P.